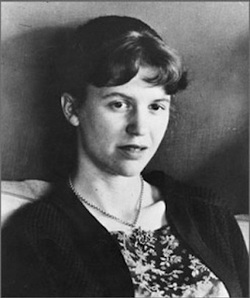 Plath was born in Boston in 1932. From an academic family, she excelled at school and began writing at a very early age. She won a scholarship to college and continued to write there. However, she suffered from depression and mood swings and was highly sensitive to criticism.

After a major depressive incident, she underwent electro-convulsive therapy and spent time in institutional care. She managed to return to college and won a Fulbright scholarship to Cambridge.

In England, she met and married the poet Ted Hughes after a very brief courtship. They had two children, Frieda and Nicholas, but their marriage was very troubled. Hughes left Plath for another woman, prompting another severe bout of depression. Plath took her own life in February 1963.


Plath's poetry is extremely confessional. Much of her mental anguish and torment is poured into her work. Formally, her poems are quite traditionally arranged, but the content varies from cold, detached descriptions to raw and powerful emotions. Motherhood is a recurrent theme for Plath, and her feelings of inadequacy often filter through. Her work often uses images from nature to explore her feelings but the personal is never far from the surface.